The long awaited port of ERDAS ECW/JP2 SDK to Linux is well underway. Indeed, we expect the Perth, Western Australia development team to reach the performance tuning stage of the port in the next few months. The Linux ECW SDK port must be tuned-up to match the Ferrari-like performance our customers expect and have on the Windows platforms. If we did not tune it up, it would not be an ECW SDK.

ERDAS will use the Linux ECW SDK internally in ERDAS 2012 server products. Once the ERDAS 2012 Linux products are ready to release, commercialization work (preparing for public release) on the Linux ECW SDK will begin. I cannot provide the time-frame for availability at this time. 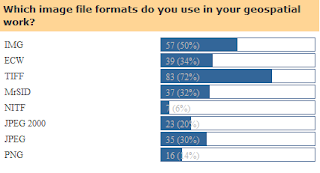 Over a year ago I put out a poll on this blog to measure what image file format people who frequent this blog use. At that time, I put the following in the poll: GeoTIFF, IMG, ECW, MrSID, JPEG, NITF, TIFF World and JPEG2000. These are the order in which the poll defined their popularity.

For this poll I combined TIFF World and GeoTIFF together and added PNG. I have noticed a dramatic down-tick in NITF votes. I believe this is likely to defense people not frequenting my blog as much as others more than what are really in the marketplace. Or, it could be the defense people voting against NITF as it is cumbersome and they want issues in the format addressed. Or... something else?

PNG is use in mobile devices and has a very solid showing.

JPEG2000 popularity has improved. You might think that JPEG2000 would hurt the ECW and MrSID formats, but the image format hurt appears to be IMG.

I did not post the final percentages from the last poll, but have posted the 2011 poll here.
Posted by Paul at 2:24 PM No comments:

ERDAS has released ERDAS Desktop 2011 Version 11.0.3. This version is available to customers with current desktop software maintenance (SWM) and contains all issues from 11.0.1 and 11.0.2. There are quite a few customer requested enhancements as well as customer reported bugs addressed in this version.

A very brief list of what ERDAS IMAGINE customers can now expect:
Use Spectral Angle Mapper and Spectral Correlation Mapper classifiers in Supervised Classification
Distribute MosaicPro image tile creation to internal Cores or to external CPUs on their network
Rescale data from 16-bit down to 8-bit in MosaicPro and in LPS ortho processes
Expect higher performance from the Mosaicpro Preview
Improved performance on MosaicPro histogram matching
And more…

There are LPS and ERDAS ER Mapper issues addressed in Version 11.0.3 as well.

This version does not include any server enhancements and fixes. (Hence the use of the word Desktop).

See for yourself at http://www.erdas.com/service/support/fixes_enhancements/ERDASIMAGINE2011.aspx

After looking at what is in Version 11.0.3, if you want the version, you must log-in with your current SWM account to download the version. If you have current SWM, go here and log-in:

2nd in the series of 2010 ads showing the UI as it develops.

ERDAS 7.4 with 1024 resolution and ERDAS ARC/INFO Link (later renamed to Live Link). The First mention of Live Link was in the Feb 1988 PE&RS 10th anniversary of ERDAS ad.

This late 1980's Erdasity Button was donated by Ulrich Terhalle of GEOSYSTEMS GmbH.

LSU Prof. Dennis Fehler wrote, "GISMO is the most powerful spatial modeler yet. You can accomplish complex objectives in a fraction of the time it would take using conventional methods."

Model Maker, Vector Module & Radar Module introduced. This ad has the phrase, “Intelligent Images Map the Future". This was modified to "The Map of the Future is an Intelligent Image" and trademarked for the September 1993 PE&RS ad.

OrthoMAX Ad, not sure if this was from the pre 8.1 verison, but I believe it is. The ad was to promote OrthoMax and the Vector Module (1st GUI to edit Arc Coverages).

ERDAS IMAGINE 8.1 Ad, there is an earlier 2-page ad in June

"IMAGINE OrthoBASE Bridges the Gap Between Digital Photogrammetry and GIS." Promoting the block ortho-correction over the single frame resection approach.